Clifton Hill Tennis Club offers a number of competitive offerings, such as:

The competition consists of an Autumn Season (late January to June) and Spring Season (August to November), each of 14 rounds, with 7 home and 7 away matches. We email current members in May and November each year to invite members to express their interest in joining a team.

In general no games are played on long weekends or on public holidays. Games are played during the mid-week starting from 7pm and generally finish by 9:30-10pm.

In total, there are about 70 clubs and another 50 teams independent of a club that are part of this association, during each season a team plays between 6-8 clubs/teams. These may include clubs such as Norris Bank, Greensborough and McLeod and teams such as Ambos, Fish Sticks and Golden Girls.

Club Championships
Club Championships is the most important event for the Club and held each year. If you play in the Junior or Adult competition, it is expected that you sign up for the Club Championship because it helps with establishing rank order for externally facilitated competitions. It is also helpful if you are looking for a hitting partner as you will meet with other members (establish contacts) and get a feel for the type of player that suits you in any partner program. From 2018 we have introduced ‘First-time’ categories for new members who have not played in a competition environment. First time competition players can enter in the open competition as well as this special category. The competition is free for all members and most matches played within the first two weekends with outstanding matches organised by players.

Leaders Table Competition
There are four social competitions per season. This is for members who find it difficult to meet a fixed competition schedule due to their work commitments and still want to play competitively in a competition organised by the Club but where matches are facilitated by players. The competition consists of round robin format with a finals play-off if more than one section is played or it is difficult to distinguish a clear winner. The players will be awarded a certificate and named in the Club’s Annual Report. The scores of these matches will count towards the Club Social Leaderboard if players elect to participate in this program. From time to time we offer both singles and special doubles competition where players have access to full prior match results within their registered competition.

Leaders Table
Club Social Leaderboard is a fun a way to check how you rank against other social players in the club and encourage members to play more tennis and improve their game. The program is open to all members including club organised competition players.

Members who have participated in the Social or and Club Championship competition programs over the year are invited and if they have played at least thirty games (equivalent to two-three matches) will have their ranking published. The initial ranking system is social and whilst we have made some adjustments to the algorithm to bring club championship players to an equivalent derived ranking score – at the moment it still favours social players. High ranking club championship players can still challenge social players for the best Club Social Player. Rankings will be updated after each Social Competition Season.

The current leaderboard (as at 1st November 2019): 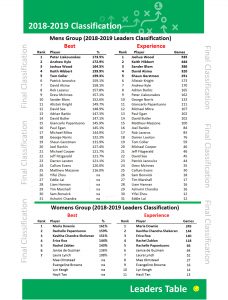