Clifton Tennis Club was formed when the courts were opened Saturday, 14th December 1929. There was also an earlier lawn tennis club at Victoria Park in 1899.

Originally the facility operated with four clay courts; the additional two multi-purpose courts were added May 2006 at which time the clay courts were replaced with the synthetic grass surface.

From 2006, netball was introduced to the facility and the Mayors Park Tennis and Netball Centre continues as a vibrant multi-stakeholder facility.

In 2017, members voted to change the name to Clifton Hill Tennis Club to reflect the full suburb name.

We hope you’ll continue to enjoy the Club as we enjoy our 90 year anniversary of community tennis! 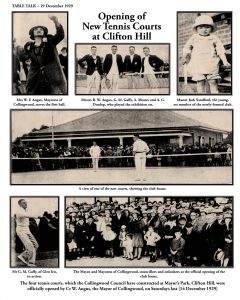